Even the most carefully laid plans can change in an instant. For 18-year old Chase, a car accident in December of his senior year of high school changed almost every aspect of his life. Rather than finish out his high school career in the classroom, he spent months fighting – first for his life, and then for as much movement as possible.

Chase was airlifted from the accident to the University of Iowa Hospital with a spinal cord injury and multiple broken bones. The doctors discovered that Chase had a vertabrate fracture of the C-3, C-4, and C-6 bones in his neck, and a burst fracture of the C-5 bone. He had no movement in his body below the neck. To keep him alive, doctors implanted a g-tube for feeding and a tracheostomy to allow him to breathe. They also performed multiple surgeries to repair his broken bones, and implanted an artificial C-5 bone.

After a month of acute care, Chase came to ChildServe’s pediatric rehabilitation program. He began intensive physical, occupational, and speech therapy to win back as much independence as possible. Along with his physical limitations, Chase’s path forward included possible mental roadblocks too. His life had changed – but the attitude he used to respond to these changes was just as important to his success as any physical progress he would make.

Amy Starbuck, a Licensed Practical Nurse at ChildServe, saw Chase grow in many ways in the months following the accident.

“Early on, Chase didn’t smile, and he was really unsure of himself. Each day more of his personality comes through – he is very outgoing and funny.” 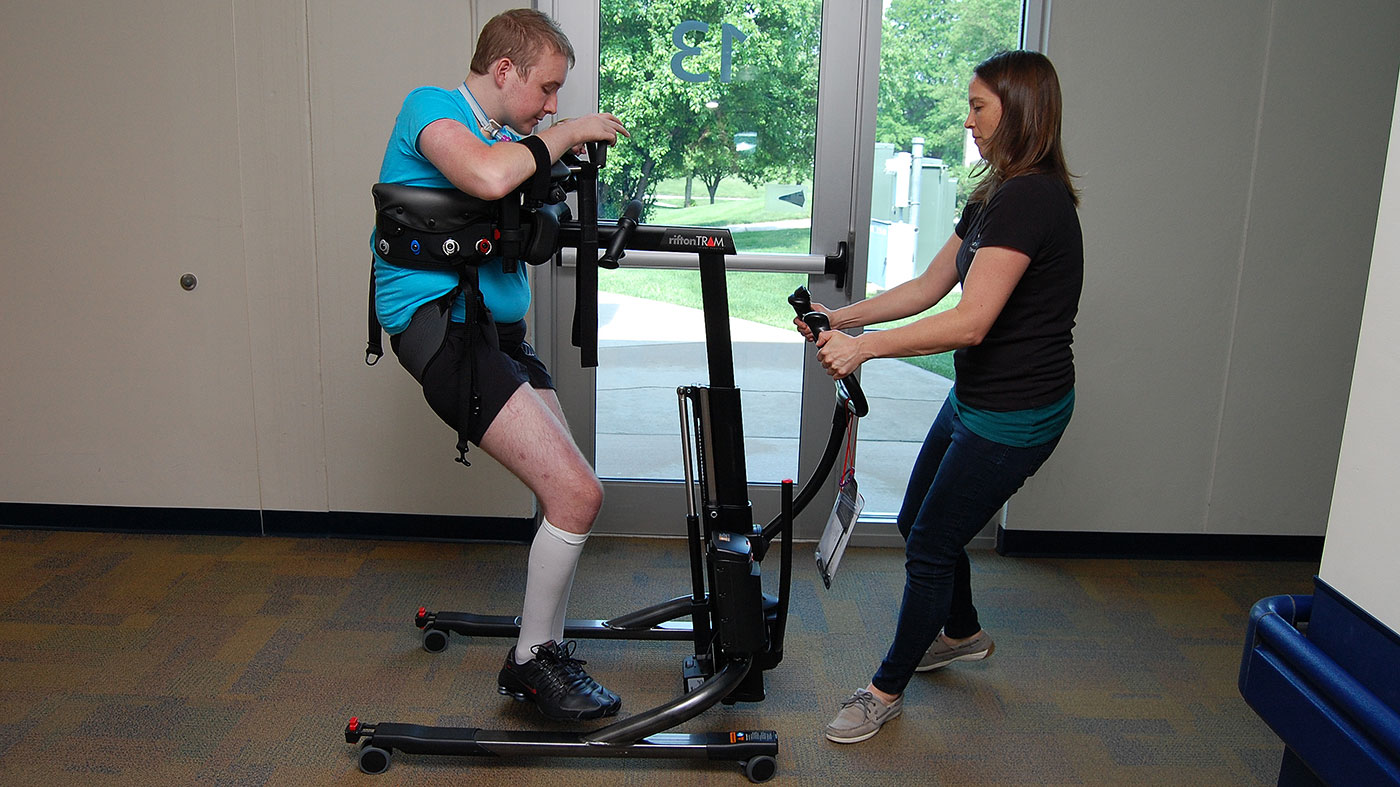 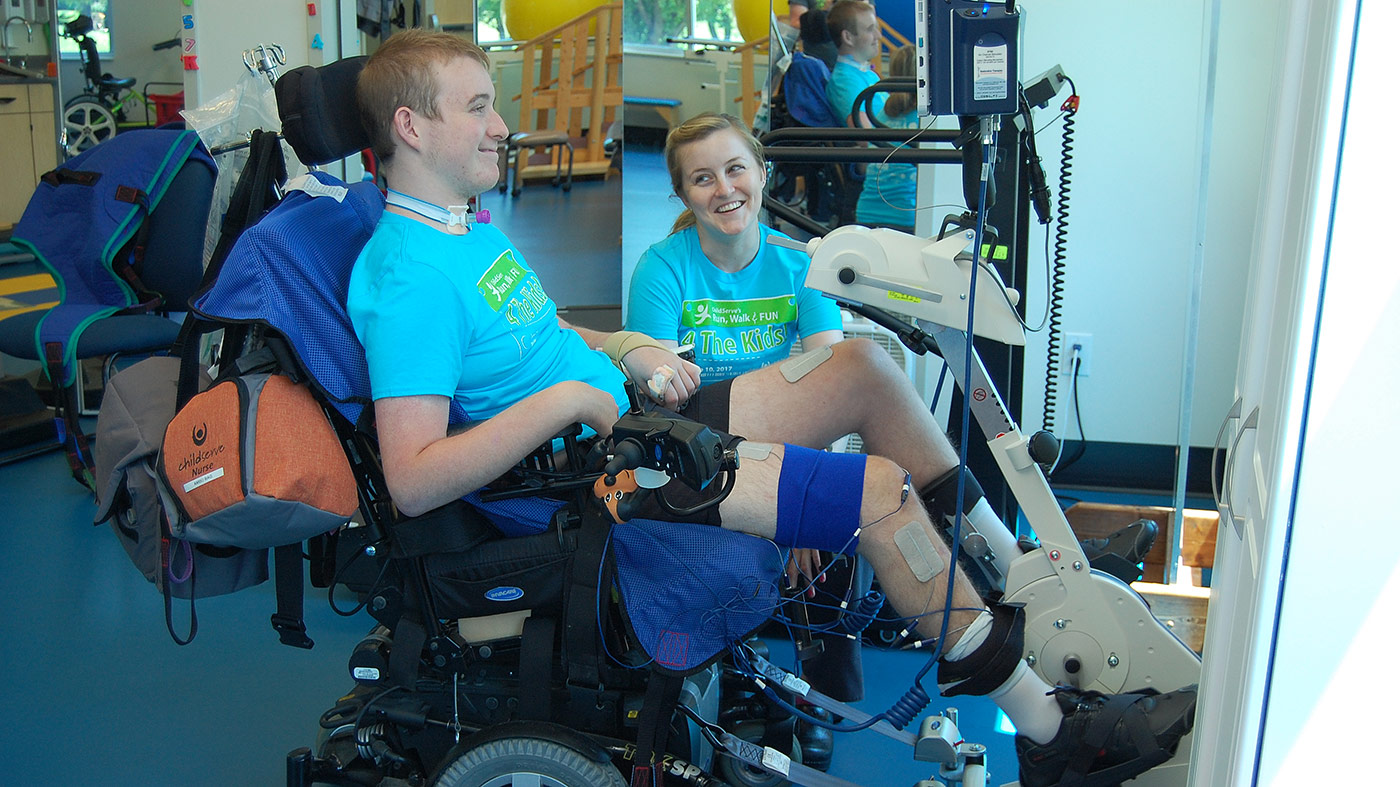 Chase’s attitude has been key to his growth and recovery of many skills. When his ability to speak returned, it became clear that Chase wanted to enjoy the simple act of eating food.

“I couldn’t swallow at all when I got here,” said Chase. “We used a piece of technology called VitalStim, which uses electricity to stimulate the muscles in your throat to help you swallow. I finally passed a swallow study after doing about 30 days of VitalStim during Speech Therapy.”

A swallow study is a test that shows whether or not the throat muscles can perform their job safely. For Chase, passing the swallow study meant that he could return to eating everything by mouth and have his g-tube removed.

“When I first got here, the goal was to move any part of my body,” said Chase. “Now I have movement in my arms and legs, and I can swallow food and speak. The therapists and nurses here are awesome.”

Amy recalls that Chase’s good-humored attitude played a big role in allowing the therapists to challenge him in new ways.

“One of the first times I saw Chase’s personality come out was during a recreational therapy session. The therapists were planning to velcro a tennis racket to his arm and toss tennis balls to him so he could practice swinging his arm and building coordination. He just went with it even though it seemed strange. He’s always willing to try anything.”

“He’s working on being self-reliant in public settings. He is absolutely capable of checking himself in at the doctor, ordering and paying for his own food, and finding an attendant if he needs any help with something. He can do all kinds of things you wouldn’t have expected he could when he first got here.”

Chase relearned many skills and gained movement back in his right arm through therapy, a good attitude, and a dedicated care team of rehab experts. He completes many daily living tasks completely on his own, like steering his powerchair, brushing his teeth, feeding himself, and using his phone. Seven months after the accident, Chase’s trach was removed, as he was able to breathe independently. Overtime, Chase also developed important self-advocacy skills.

“He’s very explanatory to anyone giving him care, and I think that’s huge,” said Amy. “If he doesn’t like the way someone is caring for him, he needs to let them know and explain directly.”

As a young adult, Chase has been encouraged to own his independence wherever possible.

“He’s working on being self-reliant in public settings. He is absolutely capable of checking himself in at the doctor, ordering and paying for his own food, and finding an attendant if he needs any help with something. He can do all kinds of things you wouldn’t have expected he could when he first got here.”

As Chase became more independent, his family prepared for him to move home. His parents passed ChildServe’s training courses to learn how to support his medical and daily living needs, and they created an addition on their house designed to accommodate Chase’s powerchair. They held a fundraiser to cover the costs of the house remodel, which gave many friends a chance to visit with Chase and show their support.

“At the fundraiser he shook everyone’s hand very confidently,” said Amy. “Even though he doesn’t have as strong a grip as he used to, he put his hand out firmly and never looked uncomfortable. He’s so much more comfortable with his own body now. I felt like he was ready to own his identity, saying, ‘This is who I am now.’”

ChildServe improves the health and well-being of 5,200 children each year through specialized clinical, home, and community-based programs and services. We serve children with developmental delays, disabilities, injuries, and other special healthcare needs.