Service
Autism Program
When most children are 18 months old, they are just starting to learn to communicate. When Michael reached this age, he stopped trying to communicate entirely. “He completely closed himself in a box and went away. He just wasn’t there anymore,” said Helen, Michael’s mom. “He was there, but not there.” Michael was showing signs of autism, which affected his ability to have meaningful communication with others. He was enrolled in physical, occupational, speech and feeding therapies at ChildServe once a week. While Helen saw progress with Michael, much of it was slow. Many children like Michael have sensory problems, which makes it hard to transition from one environment to another. “He still built skills, but not rapidly,” said Helen. “The biggest barrier was his therapists would have to work through all the sensory issues of just being there before they could even start working.” 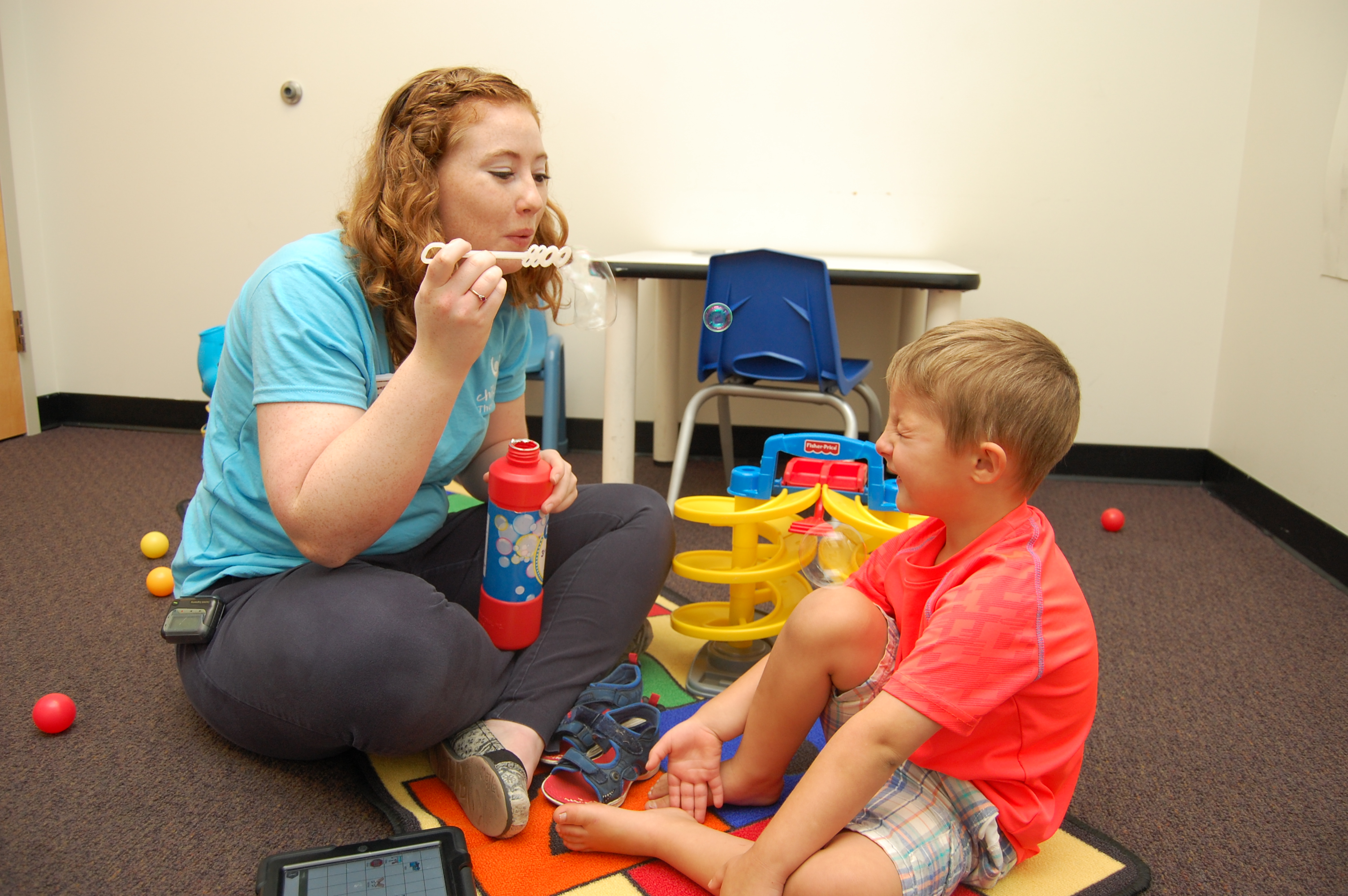 Christine, Michael’s occupational therapist, suggested he try the Autism Intensives program at ChildServe. The program, specifically designed for children like Michael who have trouble transitioning, involves multiple therapies three days in a row each week. The back-to-back sessions help Michael know what to expect and adapt more quickly to a new environment. Helen and (husband) were skeptical at first – they live a 40 minute drive from ChildServe and wanted to make sure the packed schedule was going to be worth it. In just a few weeks, Michael and his therapists’ hard work started to pay off. “When we came once a week, it was hard to separate him from us and make him go with his therapists,” said Helen. “By the second week of the Autism Intensives program, he was taking them by the hand and pulling them out the door. He’s just a different kid.” Michael, now 3, has completed over 20 weeks of the Autism Intensives program. He has gone from avoiding eye contact with people to seeking interaction with them. He responds to questions and statements from his parents and is using sign language much more effectively. Helen says his progress has made a huge difference for her family. “We can see he’s utilizing the things he’s been taught now. He’s using them more rapidly and daily,” said Helen. “He will avoid people who are angry, he will comfort people who are upset and he laughs and teases his siblings, which we never saw happen before.”

The program aims to help children see more rapid improvement in communication skills and engagement. It is ideal for children who are just starting to try to communicate and interact using language. Having therapy at least three times a week helps children get used to their therapy faster and build skills more quickly.

“Coming here three times a week has given Michael a lot more structure and made him aware of what was going to be happening,” said Christine Weiland, Michael’s occupational therapist. “The intense therapy helps him focus on tasks, participate in purposeful play and just make a lot more progress than before.”

Helen says the biggest change she’s seen in Michael is his desire to communicate with others. She hopes that as he continues in the Autism Intensives program, he’ll keep gaining the skills he needs to communicate effectively.

“This has made a huge difference in Michael, it’s been life-altering for him,” said Helen. “He doesn’t want to be closed in anymore. He’s finally coming out of his box.”